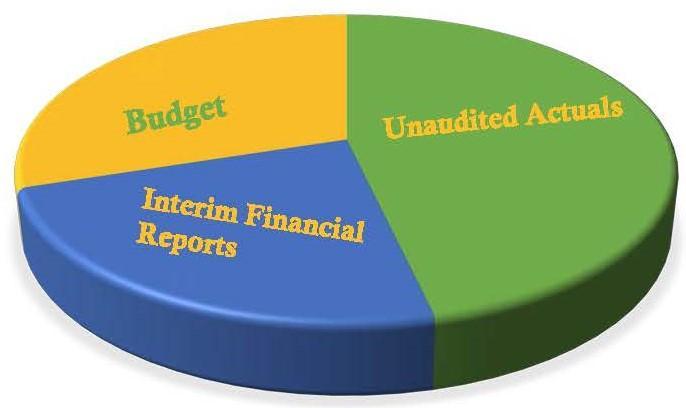 The District’s fiscal year runs from July 1st through June 30th. During each fiscal year there are four reporting periods as directed by the State of California and the San Joaquin County Office Of Education. In addition to the period reports, an outside independent audit is required of the final annual report.

The reporting periods and their associated reports are:

An outside independent audit is required annually.
Interim Reports
﻿
Each interim fiscal report developed pursuant to Education Code 42130 shall include an assessment of the district budget as revised to reflect current information regarding the adopted state budget, district property tax revenues, if any, and ending balances for the preceding fiscal year. (Education Code 42130, 42131)

The interim reports shall be based on State Board of Education (SBE) criteria and standards which address fund and cash balances, reserves, deficit spending, estimation of average daily attendance (ADA), projected enrollment, ratio of ADA to enrollment, projected local control funding formula (LCFF) revenue, salaries and benefits, other revenues and expenditures, and facilities maintenance. For purposes of assessing projections of LCFF revenue, the first interim report shall be compared to the adopted district budget, and the second interim report shall be compared to the projections in the first interim report. (Education Code 42130; 5 CCR 15453-15464)
Budget
School Districts shall adopt a budget on or before July 1 of each year {Ed Code 42127(a)(2)}.  The governing board shall file the budget with the county superintendent within five days of adoption or by July 1, whichever occurs first {Ed Code 42127(a)(2)}.
Unaudited Actual Receipts and Expenditures
Attendance
Where does ADA come from?  ADA is the anticipated average daily attendance from the first day of school up through the last school month that ends prior to April 15.   The district is funded based on that ADA for the current year or prior year, whichever is greater.